Arcadis has urged the Federal Government in Australia to ensure that the design of the Inland Rail project can accommodate hydrogen-powered trains as a key step in decarbonisation. Hydrogen Industry Leaders look at a recent study that reveals that hydrogen will be cheaper than hydrogen and how it will benefit the people of Australia and beyond.

The call comes after a study by UK-based clean-energy group Smart Ports and Arcadis revealed that hydrogen will be cheaper than diesel within a couple of years and that if the industry uses hydrogen to power rolling stock on the route, it could potentially strip 763,000 tonnes of CO2 from Inland Rail operations annually.

Decarbonisation Is Essential To Reach Targets

Decarbonising Australia’s rail infrastructure is essential if Australia aims to achieve net zero emissions by 2050. As outlined in the Australian Government’s document ‘Australia’s long-term emissions reduction plan’, it states that the aim is to reduce emissions by up to 35 per cent by 2030.

Arcadis’ study found that if the cracking technology were used on the Inland Rail, it would be cheaper to use hydrogen than diesel from around 2024.

Inland Rail is the largest rail project in Australia and will connect Melbourne and Brisbane via regional Victoria, NSW, and Queensland.

Up to $14.5 billion has been invested by the Federal Government in Australia in constructing the line, with construction expected to be completed by 2027.

Hydrogen Is Found To Be Cost-Effective

Hydrogen Industry Leaders spoke to Arcadis Clients Director – Resilience, Luke Keys, about the study and why moving to hydrogen is so essential.

Luke began by explaining that through the study, the main find is the cost-effectiveness of hydrogen: “The opportunity that we have uncovered and unpacked in this study is that it can be more cost-effective to run this freight rail by using Hydrogen.”

“When you look at diesel, the vast majority of diesel here in Australia is imported, so we have a sovereign risk on that. For every litre that burns, it produces 2.6 kilos of CO2. When we start pricing the externality of carbon, which is coming, that’s the way the world is moving to a net zero future and capturing all the CO2 emissions, it’s the right thing to do.”

Hydrogen can be produced locally and very cheaply. Australia is blessed with a lot of sunshine and wind and is well placed to be one of the cheapest producers of green hydrogen.

Infrastructure Must Be Future Proofed

With significant infrastructure projects, Luke expressed that the costs and impacts are very low if the design change is made early.

However, if the industry waits five or 10 years to then add hydrogen refuelling stations along the railway line, “you’re dealing with existing infrastructure and brownfield development and live trains going past, it’s going to be so much more expensive. Let’s make the decision and future proof it right now.” 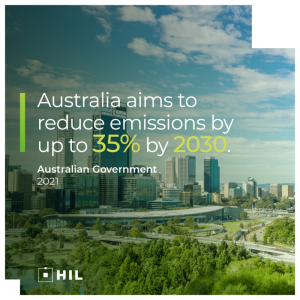 The Industry Can Overcome The Challenges

To overcome the challenges the industry faces, Luke stated it is essential that the industry uses the standard modular approach to build green hydrogen production facilities: “It is no different to what we’ve done in the offshore wind throughout the UK and Europe, and what we are doing with solar in Australia and America.

“We’ve brought the price curve down; it is easily apparent that we can do the same thing with green hydrogen production.”

But the real challenge is that we must build both the supply and demand sides of the equation together.

Luke used Inland Rail as an example: “There is a real challenge around the major rail locomotive developers to scale up their traction. Their locomotive units need to operate off hydrogen fuel with large enough fuel cells with the right power to weight ratios.”

Australia Has The Opportunity To Become A Green Exporter Of Hydrogen

Building out current technology is one way in which the industry can overcome the many challenges. Smart Ports has been supported by the UK Government through a grant which Luke explained will “provide countries with great opportunities to be the first mover in building out the technology to solve this.”

There are great opportunities for countries like Australia to become a green hydrogen exporter.

Luke ended by highlighting that hydrogen provides the industry with plenty of opportunities but to see real change, collaboration is essential: “I think the opportunities are endless. We need to all get aligned and push harder and faster to transition our economies to be net zero and build out this fuel of the future.”

Arcadis has partnered with CLARA Energy which is currently looking at a gigawatt scale hydrogen production facility in Australia. Separate development by CLARA Energy conducted by PwC shows that based on the decline in production costs from 2022 to 2032, green hydrogen will become a viable alternative to diesel for domestic use and international export.