Despite the Russian invasion of Ukraine, it is essential that Ukraine isn’t left out of new decarbonisation targets, infrastructure and policies. Hydrogen Industry Leaders examines why Ukraine must be supplied with hydrogen and the recent Canadian Commitment.

Due to the renewable energy potential of Ukraine for green hydrogen production, the country must not be left out of hydrogen strategies despite the invasion. Renewable energy is an integral part of the solution to how every country will achieve net zero by 2050.

Aiming to end their reliance on Russian gas, the European Commission sees hydrogen as a core pillar of this plan and calls for a quadrupling of hydrogen use by 2030.

Outlined in the ‘Results of the activities of the Energy Association “UKRAINIAN HYDROGEN COUNCIL” in 2021‘ document: “Ukraine is interested in developing the national hydrogen market and infrastructure.”

To do this, the country has produced a draft Hydrogen Strategy for the first time. Its implementation allows Ukraine to achieve absolute energy independence and become a producer of strategic energy carriers for the global market. 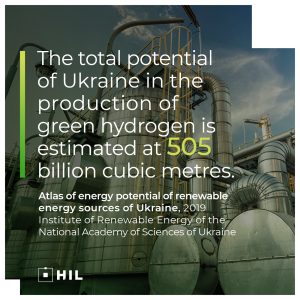 Ukraine Aims To Decarbonise Its Economy Through Green Hydrogen

While Ukraine has the potential to become a hydrogen exporter, Canada has committed to supplying Ukraine with Hydrogen to aid the transition to low-carbon energy while the invasion continues.

Containing a complete list of measures needed for the country’s green transformation, the first Ukraine Hydrogen Strategy identifies how the production and use of green hydrogen can help  decarbonise its economy and provide environmental benefits.

At the Plenary Session of the sixth Eastern Partnership Summit in Brussels on December 15, 2021, the President of Ukraine, Volodymyr Zelensky, spoke about the importance of Ukraine becoming energy independent: “Ukraine is ready to become a leader in developing hydrogen energy.”

This will enable our country to gain full-fledged energy independence and achieve climate neutrality.

Ukraine Relies On Support From Other Countries

Shortly, the EU and, in particular, Germany will need a large quantity of hydrogen, which should be produced with green electricity. Currently, Ukraine cannot have sufficient amounts of hydrogen.

Therefore, in a bid to diversify Ukraine’s energy supply amid Europe’s energy crisis, Canada will be supplying green liquid hydrogen to the country.

The National Joint Stock Company, Naftogaz of Ukraine, has entered an agreement with Canadian, Symbio Infrastructure to purchase green liquid hydrogen and low carbon liquefied natural gas (LNG) from Quebec, Canada. Symbio, through a signed Memorandum of Understanding (MoU), is set to supply the fuels to help Europe address the ongoing energy crisis. Operations are set to commence in 2017.

CEO of Naftogaz Ukraine, Yuriy Vitrenko, said: “This agreement is an important milestone on Ukraine’s path of transitioning to diverse supplies of energy from around the globe, which we began at the end of 2014 when we stopped the direct import of Russian natural gas. Since then, we’ve fortified our energy independence by actively participating in the European energy market.”

We believe opportunities for procuring reliable, responsibly produced long-term energy supply from allies like Canada and Symbio’s facilities by 2017 is critical to our energy security, transition and future economic prosperity.

Naftogaz has said it is committed to building up green energy assets to allow an energy transformation to decarbonise the Ukrainian economy.

Ukraine being included in hydrogen strategies is essential to ensuring that we reach our net zero targets, and working t together is key to decarbonising.