The partnership with Ferrari marks Bloom Energy’s entry into the European Union and Italy. Through Bloom Energy’s platform, which converts fuels such as hydrogen, biogas, or natural gas into clean electricity without combustion, Ferrari is expected to be able to reduce its fuel consumption and carbon emissions at its manufacturing facility while unlocking cost and sustainability benefits.

Bloom Energy Servers will initially provide five per cent of the energy needed at Ferrari’s Maranello headquarters and manufacturing centre.

The Collaboration Will Support Ferrari In Becoming Carbon Neutral

The servers are expected to cut gas requirements by around 20 per cent from the combined heat and power (CHP) system now in use at Ferrari while  reducing emissions.

Therefore, it is thought that this will enable Ferrari to bolster energy conservation amid record-high energy prices while simultaneously reducing GHG emissions and improving local air quality, with virtually zero harmful air pollutant emissions such as sulphur oxides, nitrogen oxides, and particulate matter.

Founder, chairman, and CEO of Bloom Energy, KR Sridhar, said: “Ferrari is a legendary trailblazer in the luxury automotive industry, and Bloom Energy commends their commitment to leading in both operational excellence and carbon neutrality across their entire value chain by 2030,

“By collaborating, we’re showcasing how energy-intensive industries, such as manufacturing, can be decarbonised through clean, reliable energy. Ferrari, like Bloom Energy, commits uniqueness, innovation, technology leadership, and continuous learning, making them the ideal partner for Bloom’s entry into the European manufacturing landscape, where energy resilience is more crucial than ever.”

In addition, Bloom Energy’s fuel-flexible platform will aim to equip Ferrari to lead Italy’s emerging hydrogen economy. According to Italy’s Ministry of Economic Development, Italy plans to cover a fifth of its energy demand from hydrogen by 2050.

Ferrari will not only hope to be a benchmark for Italy’s emerging hydrogen economy but also a benchmark in the world of car manufacturing and motorsport.

Ferrari showing that it is possible for manufacturing to be decarbonised through hydrogen and being open to it could persuade other car manufacturers to be available to use hydrogen too.

According to ‘The Road to Hydrogen Cars’ report by Expleo, 84 per cent of automotive leaders believe that hydrogen vehicles can help to reduce the industry’s carbon emissions.

The competitiveness between car manufacturers will see hydrogen innovations develop more quickly because everyone will want to do better than their competitors. 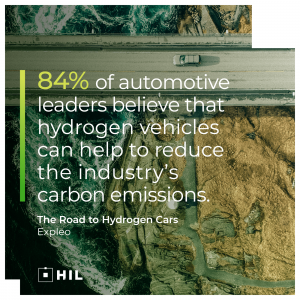 Hydrogen is crucial to reaching our sustainability goals, but manufacturers are cautious when it comes to committing to the technology, which is where motorsport innovation comes in to build confidence.

Over the last few years, the Formula E Championship, for example, has become the first sport with a net zero carbon footprint. It provides a platform for developing EV technology and sustainable mobility.

It shows that once innovations have been proved successful in the racing industry, they can be replicated by car manufacturers to create more comfortable and performing vehicles.

Similarly to EV with the Formula E Championship, racing technology will make hydrogen more highlighted, cooler, and more attractive. Showcasing the potential of hydrogen will be educating for both manufacturers and consumers because of how safe and efficient it will be, will be shown.

Hydrogen will hugely impact the motorsport industry as soon as 2024, with an off-road championship launched called Extreme H. It will see vehicles powered by hydrogen fuel cells and be world-first for motorsport.

The same powertrain and chassis in Extreme E will be used in the Extreme H car. Still, the key differentiating factor in Extreme H will be that the hydrogen fuel cell will replace the battery as the principal energy source.

Hydrogen Industry Leaders recently spoke to Ali Russell, Chief Marketing Officer at Extreme E and talked about Extreme H and the impact it will have.

To hear more about hydrogen in motorsport, highlighting world issues through using hydrogen, creating a new audience for the sport and more, click here.