Launched in 2021, PlusZero is replacing GHG emitting diesel generators with portable, zero-carbon alternatives powered by green hydrogen from renewable electricity generated on the Western Isles. The aim is to decarbonise the events sector.

Zero-emission energy will be used for three days and nights, powering 12 different acts in The Islands Stage area. The festival is the first festival in Scotland to run a complete stage consecutively for the duration of a whole event on green hydrogen.

PlusZero does this across early adopter markets, such as outdoor events, film and TV locations, filming, production, construction, and other areas where they are looking for clean portable power solutions.

Mark said that when it comes to the HebCelt festival, PlusZero is bringing a new, highly modernised generator to the festival, bringing it on its custom trailer.

The way that PlusZero is supplying the green hydrogen fuel generator to the events, Mark claims nobody else is doing it this way: “We’re setting a benchmark because nobody is doing what plus zero is doing in terms of green hydrogen production in the UK.”

Green hydrogen production on the Western Isles and the supply of green hydrogen fuel generators to the events, construction, and film industry. Nobody else is doing that right now.

He continued by explaining that supplying the green hydrogen to the festival will benefit the people of the Western Isles and beyond: “This green hydrogen is being produced on their islands.

“One of the things that we believe is that when you’ve got green hydrogen that is produced off-grid, it’s a real opportunity to devolve and democratise energy and bring it directly to communities.”

The wind that happens there is the wind on their island, it seems absurd that they can’t benefit from the power source there.

In addition to this, Mark explained that the local community of the Western Isles are already on board, and they want this shift to hydrogen use to happen, which he said was extremely rare. 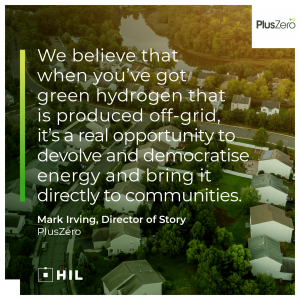 When it comes to people, persuading them that hydrogen is safe is essential. It was revealed in Keele University’s ‘Consumer Perceptions of Blended Hydrogen In The Home: Learning From Hydeploy’ document that despite support for 100 per cent hydrogen, there are a lot of concerns about the transition to hydrogen.

In the survey, residents said that they felt that they needed more reassurance about safety and effectiveness because of the more significant changes required.

Mark expressed that a high level of safety considerations for every event that it powers is important when it comes to creating confidence among the public, and it is about “persuading people who think hydrogen is a boffin’s space.”

We know that we’ve got to go the extra mile to persuade people that it isn’t new and wacky, it is entirely manageable.

However, the fact that hydrogen is being used in the festival, makes hydrogen interesting and not intimidating for both people and companies thinking about transitioning to hydrogen.