Jacobs has highlighted through a report, the importance of airport owners and operators planning for the delivery and storage of hydrogen now if they are to be ready to fuel hydrogen-powered aircraft by 2035. Hydrogen Industry Leaders explores the study and why it is essential that the aviation sector focuses on decarbonisation and futureproofing.

The ‘Airports as Catalysts for Decarbonisation’ report provides a roadmap for airports when it comes to implementing hydrogen, with the company informing that due to the length of time it takes to plan, design and implement the new infrastructure, airports must take provisions.

To help airports make the shift, Jacobs has intended three scenarios for the supply and storage of hydrogen. Scenario one is the delivery of liquid hydrogen directly to the airport by truck, scenario two is the use of a hydrogen gas pipeline with on-site liquefaction and scenario three is the use of electrolysis for hydrogen production on-site at the airport.

Planning For New Infrastructure Can’t Be Delayed Any Longer

Ian began by explaining that the interesting thing about using hydrogen in aviation is that “most other applications of hydrogen that are being considered now is that they’re looking to use liquid hydrogen, as opposed to hydrogen gas.

The key starting point is, when will hydrogen aircraft start to emerge?

Planning for investment and new infrastructure must happen now because airport masterplans can have a 15 to 30-year time horizon because it takes a long time to plan.

Andrew revealed to Hydrogen Industry Leaders that part of the reason airport new infrastructure takes so long to plan is because “it takes a lot of money to develop an airport. You need to plan for what you can do economically. You are trying to forecast the future, which is inherently difficult.

“Generally, particularly in Europe, or most parts of the world, you are looking at existing airports. When you are trying to implement changes at those airports, you’ve got to do so in a manner that does not bring the airport to a grinding halt. We are seeing enough of that at the moment.

You are going to start to reconfigure and replumb your airport for hydrogen in the future. You need to think about that 20 years in advance.

It is crucial that airports plan multiple years in advance because by then commercial aircraft may run on multiple fuels, so airports need to have the infrastructure in place to supply the multiple fuels but have the space to eventually see every aircraft use the same sustainable fuel; hydrogen for example. 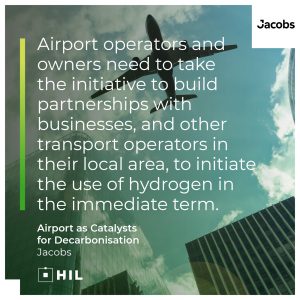 The Aviation Industry Needs To Invest To Understand Hydrogen

The report suggests that airports need to be thinking about the future and with this, two things are going on – active and passive safeguarding.

Andrew explained that passive safeguarding is not doing something right now: “It says just think about it, don’t build something here if that space might be needed for hydrogen, build it either side to allow space for hydrogen in the future.

“Then there is active safeguarding, which is where you start to spend a bit of money by not putting space in for it and putting in no underground tunnels for hydrogen in the future. You are saying that you are going to safeguard it and that you are so confident that you know exactly where it is going to be, that you will start to put some money in.

“The other bit that’s in the report that Ian and myself wrote, is the visionary bit about how you can then make an incremental step-by-step investment in hydrogen, so you don’t try and say that hydrogen is going to happen in 20 years with aircraft, therefore we will make our investment in 20 years when we don’t know anything about hydrogen.”

“We talked about the landslide and airside landside where you drive air sites around the aircraft, very simple, different types of vehicles, but we could start crying them by hydrogen. It just means that you learn a bit more about hydrogen.”

You’ve got that incremental growth in investment and knowledge, which means when you come to make the bigger investments, the scary ones, replumbing your airport for hydrogen, you’re safeguarded for it.

Becoming A Catalyst For Hydrogen Will Benefit The Aviation Sector

Ian spoke about the benefits that airports creating the infrastructure for hydrogen would bring: “There is no doubt that using hydrogen as a fuel is far more sustainable than using diesel or kerosene, that is just a given fact.

“But I think that there are other benefits, you’re going to get cleaner air around the airport, which is good for the workforce. Airports are nosy anyway, but with the use of hydrogen-fuelled ground support equipment, buses, and trucks, they will be virtually silent.

“If an airport becomes a catalyst for the use of hydrogen, then broader areas around the airport will see benefits and people will then be using hydrogen in multiple different ways.”

Ensuring that airports future-proof their infrastructure to accommodate hydrogen fuel and other sustainable fuels in the future is essential when it comes to decarbonising the aviation sector and reaching our net zero targets.