What is said to be the world’s first zero emission hydrogen-powered MASS has received approval in principle from the classification society Lloyd’s Register. Hydrogen Industry Leaders looks at why the transition to hydrogen is important to the maritime sector.

It comes after the company announced it was developing the world’s first long-endurance unscrewed surface vessel powered by liquid hydrogen (H-USV) to provide offshore security monitoring and data collection.

The vessel is being built by Portsmouth-based PDL, while electrical contractor Trident Marine Electrical is undertaking the electrical design and outfitting of the vessel.

Powered by 6,000 litres of liquid hydrogen, the vessel is expected to result in increased power, reliability, and endurance. Also, it is said that the vessel will deliver on the UK Maritime Strategy climate change commitment to zero emission propulsion by 2025.

Hydrogen Industry Leaders spoke to Michael Tinmouth, Chief Operating Officer at ACUA Ocean about why it is so important to see the shift to using hydrogen in the maritime sector.

Michael began by explaining that being passionate about the ocean is in his blood, as he and his brother (Neil Tinmouth, CEO at ACUA Ocean) have come from ocean backgrounds, not just career-wise but family-wise: “Neil and I come from a long line of mariners, our mum and dad were both in the Royal Navy.

“We’ve always been passionate about the ocean and ocean protection. What we have seen working in the sector was the emergency of autonomy.

“The idea that you could use robotics and autonomous systems to do all the dull, dangerous and dirty jobs that you don’t want people to do.”

He continued to explain that the industry doesn’t want people in the most dangerous situations and getting seasick when these can be replaced with autonomous roles. Instead of working on a dangerous job at sea, the person would be sitting in a high-tech role in a control centre.

With this real opportunity in the emergence of autonomy, many challenges face the maritime sector. Michael said the main challenge ACUA Ocean found was that most MASS vessels were using one of two fuel and power sources: “The first was diesel engines and the trouble with that is they are almost always the first thing to fail on the vessel.”

Lots of moving parts require oil and filter changes and the problem is if something goes wrong, and you’re autonomous and there is nobody on board, there is no one there to fix it.

Michael explained that using hydrogen provides the company with reliability elements to have long endurance on the sea and gives them the power to have a range of commercial and environmental sensors onboard for ocean monitoring and protection. 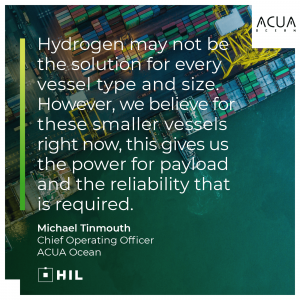 Hydrogen Can Do What Batteries Can’t For Vessels

It is essential to Michael that the maritime sector sees the shift to hydrogen: “What we’re talking about is the fuels of the future and a move away from commercial diesel towards a hydrogen future.”

Hydrogen may not be the solution for every vessel type and size. However, we believe for these smaller vessels right now, this gives us the power for payload and the reliability that is required.

Hydrogen is key when it comes to what batteries can’t do: “When you go out further in the open ocean, when you’re in those offshore locations, and when you are protecting maritime protected areas or monitoring infrastructure from an anti-submarine defence security perspective, the battery is simply not an option.

“That is where fuels like hydrogen, ammonia and methanol become interesting. This infrastructure is an entire shift away from what we have been using for the last 150 years.

“So, there needs to be a degree of certainty as to which fuel is going to be the one so that we can invest in the infrastructure, the logistics and the supply chain.”

What we are increasingly seeing now is hydrogen, with the more use case for hydrogen, there are more successful deployments. That is what is leading up to an uptick in adoption.

According to UK Research and Innovation, the shipping industry is responsible for around 940 million tonnes of CO2 annually, which is at least 2.5 per cent of the world’s total CO2 emissions.

Michael told Hydrogen Industry Leaders that people need to be more aware of the negative impact the maritime industry has on the environment as “we are all told about how environmentally unstainable flying is but maritime produces a high percentage of carbon emissions. All the goods that we purchase are fuelling the growth in maritime carbon emissions, we need to combat this.

“Otherwise, carbon emissions are going to increase by up to 50 per cent in the next 20 to 30 years, maritime decarbonisation is absolutely critical as 95 per cent of the goods we buy in the UK are transported via sea.

“It is absolutely important that we move towards decarbonisation, and what we are seeing is the adoption of green hydrogen from renewable sources.”

Autonomous vessels provide the maritime sector with a massive opportunity to decarbonise and help the UK reach its net zero targets.