H2 Green, a Getech business, signed a deal with SGN Commercial Services (SGN) to develop a major green hydrogen production, storage, and distribution facility in Inverness last year. Hydrogen Industry Leaders look at how this will decarbonise the Highlands.

Groundwork has now commenced for the green hydrogen production, storage, and distribution facility located in Inverness.

This location not only puts Scotland on the map for hydrogen but also hydrogen presents a valuable and cost-effective route for widespread decarbonisation of the Highlands region.

Decarbonisation is essential if Scotland wants to achieve net-zero, and meet its ambition of 5GW of renewable and low-carbon hydrogen production by 2030 and 25GW by 2045 as outlined in The Scottish Government Hydrogen Policy Statement.

Describing H2 Green as a collaborative company, Luke explained how working with other companies who are deemed as a competitor typically is encouraged and that most hydrogen developers are in the same boat: “Having several providers providing competition amongst us for price and customer base will drive excellence that allows the customers to feel like they can switch over.

Hydrogen proves to be a valuable decarbonisation method for Scotland

Luke explained that when it comes to Scotland specifically, there is a situation where a lot of wind power that is produced is being curtailed. 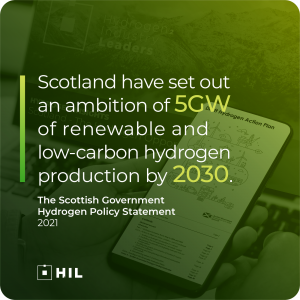 He continued to express how there is not enough transmission capacity to get it down to the population centres in England: “Even with all the forecasts for the national grid to upgrade their transmission, they’re still going to be in a situation where there is going to be a massive amount of energy in Scotland available and nowhere for it to go.

So, the opportunity for Scotland is to make value out of this renewable resource by producing a product that can be transported and stored. Hydrogen looks to be a valuable method for doing that.

Financing and finding the appropriate the investment structures are challenges

From H2 Green’s perspective, Luke said that the challenge lies in aligning offtake with supply: “To drive hydrogen prices as low as possible, I want to build facility capable of supplying hydrogen at scale. Not all customers however are able sign up to long term offtake agreements, so it is important to work with lead anchor customers who can commit to a predictable demand for hydrogen.

“Electricity makes up most of cost of hydrogen. We can drive that price down by working with renewable energy providers, to align their financing and operational needs with our hydrogen production strategy.”

Coming from a developer’s perspective, Luke told Hydrogen Industry Leaders that the challenge is around financing and finding the appropriate investment structures: “This is why we’ve got the agreement with the Highlands council. Councils and council fleets can lean forward and adopt new vehicle types earlier in the process to stimulate developers like myself from coming in and doing the production.

“They can do that by purchasing hydrogen vehicles, and they also have a long life of their vehicle fleet so they can sign into longer-term contracts for offtake. Likewise, with real customers, we can predictably know what the timetable is, we know what vehicles and what the fuel loads are.

“They do that by vehicles, and they also have a long life of their vehicle fleet so they can sign into longer-term contracts for offtake. Likewise, with real customers, we can predictably know what the timetable is, we know what vehicles and what the fuel loads are.

That lowers my merchant risk tremendously, which allows me to then go and get investment capital at a reasonable cost. If we lock those two things together, that allows the infrastructure to get moving.

Luke finished by revealing that H2 Green believes that the project is an important element of the milestone of decarbonising the Highlands: “We think that our hydrogen hub is going to be an incredibly important component of the islands.”

The development will see Inverness become one of the first places in the UK to establish commercial production of green hydrogen and the Highlands will play a leading role in the transition to zero-carbon fuel sources.