A waste plastic to hydrogen facility will take end-of-life plastic and use it to generate hydrogen use as a clean fuel. Hydrogen Industry Leaders investigates how the facility will boost sustainable transport in the UK.

Protos is set to become the home of the UK’s first Plastic Park and a concept developed by Peel NRE, Plastic Parks will provide a comprehensive solution for the management of some of the 4.9 million tonnes of plastic waste generated in the UK each year, preventing it ending up in landfill, the ocean or being exported overseas.

The Plastic Park will deal with a wide range of plastic waste providing recovery solutions for materials where recycling has not previously been a viable option.

It will take plastic that is at the end of its life, maximising what can be removed for recycling, with the remaining non-recyclable plastic used to create electricity, hydrogen, or other products. The first park at Protos will set a blueprint for the rest of the UK to revolutionise the way plastic waste is currently handled.

Hydrogen Will Be Produced For The Transport Fleet

Hydrogen Industry Leaders spoke to George Ablett, Energy Sector Specialist at Cheshire West and Chester Council. George began by explaining why the Plastic Park is so important: “Plastic pollution and carbon emissions associated with human-derived climate change represent two of the greatest threats to our environment and hence to our species in the current era.

“They also represent two sources of human pollution that can be addressed. The use of a recycling facility which not only treats plastic waste without significant transport emissions offshore and closes the loop in the circular economy of plastic but also produces hydrogen for the transport fleet (which is the second largest source of emissions in the Cheshire West and Chester Borough) is a move in the right direction.”

There will still be years of plastic to treat even if production stopped today. The delivery of this will be delivered by two facilities.

A waste plastic to hydrogen facility is the first facility and will take end-of-life plastic which would have been originally sent to landfill and use it to generate hydrogen for use as a clean fuel in cars, buses, and HGVs.

Taking food and beverage packaging such as plastic bottles and recycling them for use in making new packaging products, a Polyethylene Terephthalate (PET) recycling facility will be the second. 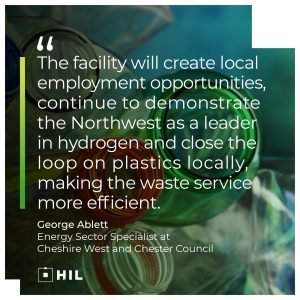 Both Transport And Industrial Related Emissions Need To Be Addressed

When it comes to the waste plastic to hydrogen facility, George expressed that creating hydrogen is essential to the UK reaching its net zero targets: “Hydrogen is a clean fuel for enabling long distance transportation of goods and to decarbonise industrial emissions.

“Cheshire West has been making significant progress on decarbonisation, however much more is needed to address both the transport and industrial related emissions.”

Projects like this one demonstrate a journey of using waste to produce clean fuel and are key to delivering a green sustainable economy in the area.

Known as PRF1, George told Hydrogen Industry Leaders that the Plastics Recycling Facility One will see plastic from the household recycling collection and mixed plastics pre-sorted to the site will be separated into different plastic types: “The separated plastic will either go to PRF2 or the PET recycling plant. PRF1 will treat up to 200,000 tonnes of plastic.

“At the Plastics Recovery Facility Two (PRF2), up to 90,000 tonnes of pre-sorted plastic from PRF1 which will be washed and processed into flaked plastic which can be used to make new plastic products, such as food packaging or drink bottles.”

He added that the Polymer Laminate Recycling Facility would see up to 2,500 tonnes of plastic aluminium laminates will be heated, the plastic will break down into an oil for reuse in manufacturing of new products and the aluminium recovered.

George said that the remaining end-of-life plastic is treated using thermal decomposition of the most common plastics such as polyethylene and polypropylene, this “produces a mixture of many different hydrocarbons which will be used as a feedstock for producing hydrogen in the energy recovery centre.”

The proposed process includes two steps: pyrolysis of plastics (burning within a contained chamber) and catalytic steam reforming of pyrolysis gases and vapours (capturing elements for reuse with chemical filters).

He continued to explain that hydrogen captured from this station will be sent to the hydrogen refuelling station and that taking hydrogen from the consented plastic to the hydrogen facility will be able to supply up to 1000kg of hydrogen per day to vehicles.

In addition to this, he revealed that the facility will be able to fuel approximately 20 HGVs from outside Protos and a similar number of internal HGV movements will be servicing operations within Protos.

George finished by highlighting that the Cheshire West and Chester Council is encouraging innovative solutions to the challenges that the UK is currently facing as we work towards a net zero economy.