The launch of the offshore renewable green hydrogen site comes after Lhyfe began its first UK operation in the North East of England to identify opportunities to deploy production facilities to support the country’s net zero ambitions.

Lhyfe Will Have A Considerable Amount Of Data After The Experiment 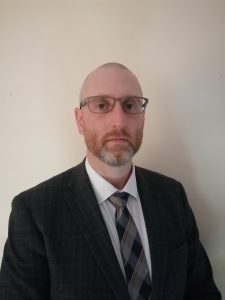 Colin began by revealing the goals of the site, named Sealyhfe: “The goal of the 18-month project is to prove that it is now possible to operate an electrolyser on a floating barge, in order to produce renewable green hydrogen offshore. Our production site was installed on the WAVEGEM floating wave platform developed by Geps Techno.”

Explaining how hydrogen will be produced, he said: “After a first phase of tests at the quay at Saint-Nazaire, the barge will be taken 20 kilometres off the coast of Le Croisic to the offshore testing site (SEM-REV) operated by French engineering school Centrale Nantes.”

There, it will be supplied with electricity from a floating offshore wind turbine. This means we will produce hydrogen offshore in real conditions using a clean, renewable energy source and sea water.

Colin said that the initial capacity is 400kW per day. However, this is just a demonstration, not an industrial scale project once scaled they expect to achieve 3GW of offshore production by 2030-2035.

At the end of the experiment, Lhyfe will have a considerable amount of data at its disposal, which is said to enable them to design mature offshore production systems and deploy robust and proven technologies on a large scale. 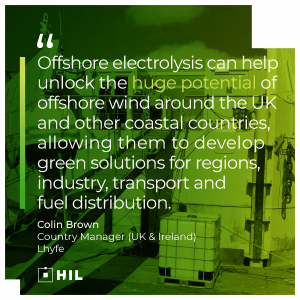 Sites Like Sealhyfe Will Support The Decarbonisation Of Other Industries

To reach ambitious net zero targets, Colin believes: “The world needs to decarbonise rapidly if we are to stop the visible impacts climate change is having. As we look to end our dependence on fossil fuels, renewable green hydrogen can reduce CO2 emissions across all sectors and help to store and transport renewable energy.”

Sealhfye is a major step forward in demonstrating its availability and our ambition to help the transition to a clean, low-carbon future.

Explaining the core benefits for the transport sector, Colin said: “We must decarbonise across all sectors and these sites are a major part of the solution. They will enable industry and transport operators to accelerate their plans to stop using fossil fuels in favour of renewable green hydrogen, and help businesses achieve their net zero targets.”

If you look at the amount of offshore generation potential around the UK and the number offshore wind farms currently in development they can’t all be grid connected.

Expanding on this, Colin said: “Of course we need to get as much green electricity onto the grid as we can but the energy transition doesn’t just stop at renewable electrification. We can also use the natural resources we are surrounded by to create clean alternatives to oil and gas based fuels.”

The energy transition we are seeing unfold in front of us will also create a large number of jobs allowing vast and varied opportunities for the youth as well as those transitioning from other sectors.

There are plenty of challenges for the Sealhyfe project to overcome. As well as performing all stages of renewable green hydrogen production at sea, Sealhyfe will have to manage the exaggerated listing, accelerations and swinging movements that will affect the platform’s motion.

To overcome this, Colin said: “We will have to manage tilt of around more than 15 degrees and acceleration around 0.5g (g-force).

Other considerations include the premature ageing of parts caused by corrosion and temperature variations. Lhyfe have also had to develop a remote system in order to operate the plant 20 kilometres from the shore.

This mean they will be able to adapt production of renewable green hydrogen, depending on the weather, the waves, and amount of electricity generated tom the floating wind turbine.

Sealyhfe has been designed to reduce the amount of offshore maintenance required in order to optimise costs.

Colin finished by explaining that Lhyfe’s mission is to “deploy green hydrogen production at scale and grow our operations in line with demand to create a better environment for tomorrow.”

Going forward, Lhyfe is exploring further opportunities across the UK to enable local decarbonisation and believes the nation can become a global leader in the production of green hydrogen and can move away from its reliance on fossil fuels, improve energy security, contribute to net zero and help to drive the economy.