Ahead of the HIL Scotland Conference on 22 November 2022, Hydrogen Industry Leaders spoke to BOC about its close collaboration with Aberdeen City Council, the hydrogen mobility sector, contributing to the low carbon shift, and the role hydrogen will have on the transport industry.

Hydrogen Industry Leaders spoke to Scott Chudleigh, Business Development Manager – Hydrogen at BOC. Scott has been at BOC for 11 years and has worked across different businesses and manufacturing industries.

Collaboration Is Crucial To Building Confidence In The Hydrogen Industry

Scott began by highlighting the importance of Kittybrewster Hydrogen Refuelling Station, which aims to drive net zero in Aberdeen, Scotland.

He said: “We’re very proud of Kittybrewster, it was a close collaboration with Aberdeen City Council. From day one, it was designed to be a reliable station to build confidence in the industry.

“We listened to what was going to be important for the bus operators, and Element Energy has independently verified the station as the most reliable hydrogen fuel station in Europe. It has been a perfect success story for us.

“Kittybrewster was built in 2015 to operate a fleet of buses in Aberdeen, and it has grown – the bus fleet has expanded, with hydrogen vehicles being brought into the mix in Aberdeen. It has been tremendous.”

Hydrogen Will Unlock the Decarbonisation for HGVs

Scott revealed that the thing that excites him the most about hydrogen mobility is the HGV, maritime, and train industries: “If you’re a fleet operator, say distributing to supermarkets, and you want to maximise vehicle utilisation, you want to be filling those vehicles up with goods.”

Scott explained that without sacrificing payload for heavy batteries, “hydrogen is absolutely going to unlock the decarbonisation of the heavy goods vehicle industry.” 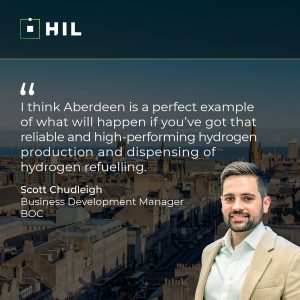 BOC uses its hydrogen refuelling and technology expertise to contribute to the low-carbon shift. BOC’s parent company Linde has built over 200 hydrogen refuelling stations worldwide and one of the biggest refuelers to date which is refuelling a fleet of hydrogen fuel cell trains in Germany, Scott Explained: “We are bringing all of that skill and expertise to the table, we are building our hydrogen network. We have got an existing large hydrogen business.”

In addition to this, Linde is supplying liquid hydrogen to a new ferry in Norway. As net zero has no silver bullet, Scott went on to explain the importance of different types of hydrogen projects: “We operate the UK’s largest hydrogen plants as we move to blue hydrogen and build larger green hydrogen projects, we are going to bring confidence, security of supply, safety, and expertise to the industry.”

Regarding refuelling solutions and decarbonising and hard-to-abate industries like glass production, BOC has been determined to showcase innovative fuel-switching trials in the UK.

This will demonstrate to customers that these industries can switch to green hydrogen, for example, away from natural gas in the future.

He continued: “I think it is about having the expertise, the scale, and the finance to make these projects happen. Companies like Linde are going to be key for a quick energy transition, a safe energy transition.”

This year has seen the EU deliver its REPowerEU strategy; Scott expressed that the strategy is an essential aspect to decarbonise transport: “I strongly agree with the basic concepts, to me what they talk about doing is a low-hanging fruit. I just think it is a real shame that we in the West, the world’s developed nations, haven’t been doing this before.”

Moving on, Scott explained how Scotland is uniquely placed to take advantage of the opportunities that renewables bring: “We [Scotland] have got massive renewable energy potential and what the strategy and the EU have clearly stated is we need to scale. We need to get renewable energy sources, diversify our supply chain, and get hydrogen.”

Scotland will be in a unique position to export hydrogen to the continent to support the strategy.

Hydrogen will be essential to Scotland as only around a quarter of Scotland’s rails are on track to be electrified right now. Regarding the need for hydrogen in the rail industry, Scott described the West Highland Line: “It is a beautiful railway but is Victorian and cut into the side of mountains. There is not necessarily that much rail traffic on it, so it will be difficult to make the business case to electrify it, particularly by 2035.”

It makes perfect sense to convert existing trains to use hydrogen where applicable.

Scott continued: “I speak about converting because there has been an excellent project, The Hydrogen Accelerator. They have taken a really old, like 1970s rolling stock that was donated from Scotrail. They’ve demonstrated that you can retrofit existing rolling stock with hydrogen fuel cells. We don’t even have to go out and buy new trains. We can take existing rolling stock and convert it.”

HIL Scotland Conference Will Explore This Notion And More

Scott Chudleigh will speak at the HIL Scotland Conference event on 22 November about enabling hydrogen for transport hubs.

He spoke about why it is so essential for industry leaders to come together at conferences: “It is important for BOC to attend such events; I have said through this interview that we are industry leaders and have been doing it for 100 years. We want to be at the Vanguard of the new energy switching revolution, the green revolution, net zero.”

We feel that attending events such as HIL Scotland Conference is a way for us to help to shape the conversation and the solutions.

Find out more about HIL Scotland on our event page here: https://hydrogenindustryleaders.com/events/hil-scotland-2022/.